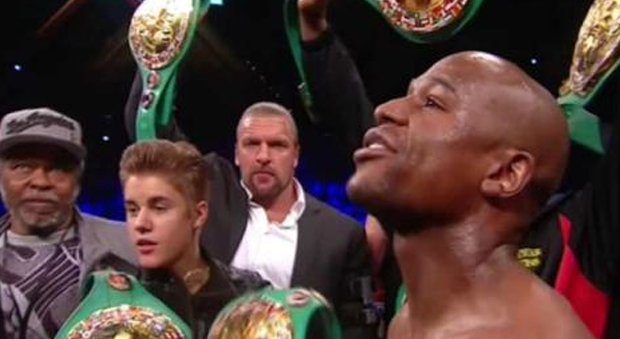 WWE’s Triple H walked Floyd Mayweather to the ring before his boxing victory against Miguel Cotto on Saturday night from Las Vegas. Hunter carried one of Mayweather’s championship belts and discretely wore a sling on his left arm, selling the storyline injury he suffered at the hands of Brock Lesnar on Monday’s RAW.

Triple H and Mayweather have been buddies since Mayweather’s involvement at WrestleMania 24. In 2009, Mayweather talked about wanting Hunter to accompany him to the ring for a fight:

“Triple H is one of the greatest guys in the world and represents a whole universe of WWE fans that appreciate what he does. He and his stature are huge and I can’t think of a better person to escort me to the ring for my return to boxing.”