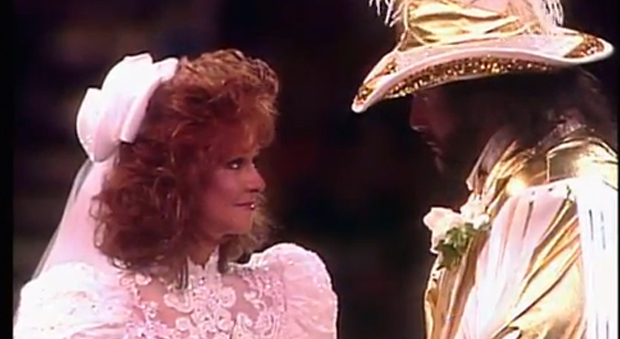 Since June is the most popular month of the year for weddings, it is only be fitting to look back at the best (and worst) nuptials to take place in and around the squared circle. Even though some were done for drama and some for comedy, all were done out of pure fun. There is something about a wrestling wedding that makes everyone take notice.

Randy Savage and Elizabeth – August 26, 1991. When Randy Savage finally tied the knot with his long time manager Elizabeth at Summer Slam 1991, it was the final chapter to the WWF’s most popular romance angle ever. What sets it apart from every other wedding was that it was used as a main event to attract pay-per view buys, and did not feature an angle at the actual event. Instead, it was the happy ending the Madison Square Garden crowd was looking for. Even though they taped a portion of the reception which started a feud with Jake Roberts, it was as straight forward as weddings get. In reality, the wrestling wedding without a swerve at the end winds up being the most popular of all time. Whether it was the event or the individuals that contribute to its popularity cannot really be determined, but it should be mentioned the spectacle has never been duplicated.

Test and Stephanie McMahon – November 29, 1999. The only other wedding that can be mentioned in the same breath as Savage and Elizabeth is the extremely captivating ceremony between the Vince’s daughter Stephanie and her wrestler boyfriend Test. The result was an interruption by Triple H, who was desperate to take out his company frustrations with Vince through his daughter. The story included a kidnapping plot, little white chapel and some over the top fun. This was the angle that really got the ball rolling on the outlandish aspects of the attitude era. The final segment of Raw that night launched an era of McMahon family drama on Raw, which would not cease until late 2003, right before Stephanie married Triple H for real.

Uncle Elmer and Joyce – October 5, 1985. The first wrestling wedding that got national publicity was a comedy sketch set for the WWF’s popular Saturday Night’s Main Event. All the major stars were involved, including the best man Hillbilly Jim. The segments did seem a bit odd because the red neck groom and dowdy bride were really supporting characters used in the background to fuel the feud between Hulk Hogan and Roddy Piper. The most important aspect of this segment that changed wrestling television was the emergence of Jesse Ventura in the role of heel commentator. Ventura, who was recently forced into early retirement due to injury, served as the antagonist to Vince McMahon’s straight man. It was the success of Ventura’s comic timing and thoughtful insight that started a new broadcasting formula.

Billy and Chuck – September 12, 2002. You have to give Billy and Chuck credit. They executed the segment as well as anyone could have asked. It was an attempt at shock television that attracted viewers, but didn’t necessarily maintain them. In a time when the WWE was trying to out-do itself with outlandish angles, the thought of two tag team partners falling in love and getting married was a little ahead of its time even in 2002. I am not even sure it would be successful if executed properly in 2012. But on the other hand, what was the event supposed to do besides attract viewers? It certainly didn’t enhance Billy or Chuck. Three Minute Warning didn’t come off as monsters for destroying two men who were just exchanging vows. There was the twist in the middle of the ceremony that was a true swerve. I would venture to guess 99% of fans watching had no idea of the identity of the preacher until he revealed himself.

Edge and Vickie Guerrero – July 14 2008. In a time when Smackdown wasn’t doing much innovative television, the cougar in power gimmick was an exciting blend of fun and intensity. It was implied that Edge was only marrying Vickie because she was the General Manager. The heat this power couple drew, although mostly Vickie, catapulted them to main event status on Smackdown for the entire year. Their wedding, which took place through the entire episode of Smackdown, was slightly comical and pretty unmemorable in comparison to other wrestling weddings.