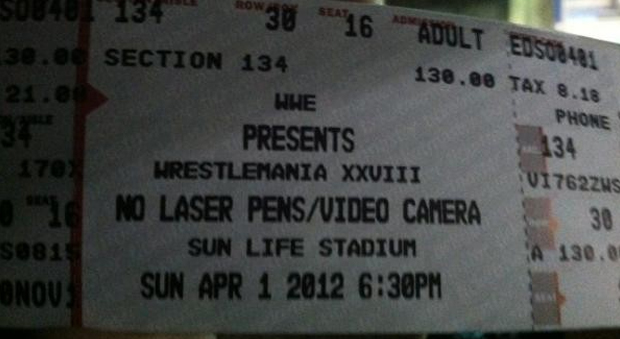 Three days before the show, there are about 61,700 tickets out. A little under 2,000 remaining at ticket outlets and there were 5,200 tickets left on stubhub (they are included in the 61,700 figure) alone when it comes to unsold secondary market tickets first purchased largely by scalpers.  Available tickets on the secondary market are priced as low as $13.99 and will probably fall from there over the next few days. Ringside tickets, which were originally priced at $1,500, were still going at a premium, selling for $2,500 minimum this week and one third row seat in the last few days sold for $7,400. Even though the stadium will probably be full with around 65,000 people, and be announced as a sellout of around 75,000, it did fall short as far as being that kind of must-see high demand event that many WrestleManias in the past have been. Is that a hint about the buy rate? Probably not. The 2008 show had the second most number of tickets given away (behind only 1992), and was one of the bigger PPV numbers in history. House show business is good right now, but this is the good season and it is down from the same period the last two years. Ratings remain strongly disappointing. It is a cause for concern when 25% fewer people watched the go-home Raw this year than last year.

Still, this will still be a gigantic event, probably a good to great show and a huge money making promotion. Last year at this time in Atlanta, there were fewer tickets available at this point and that show was actually not sold out according to figures from the Georgia Dome released weeks later.